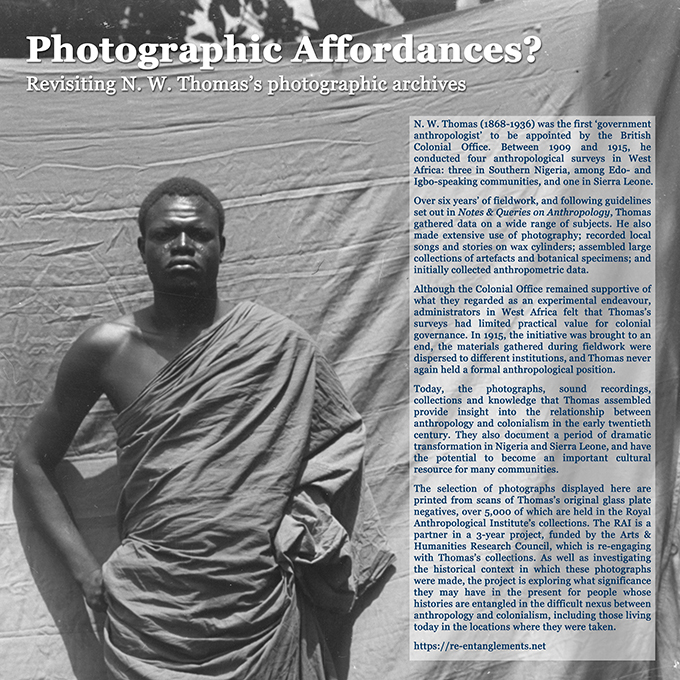 Marking the launch of the [Re:]Entanglements project, the first of a number of exhibitions related to the project has been installed at the Royal Anthropological Institute in London. The exhibition, entitled ‘Photographic Affordances’, includes a selection of fine digital prints from scans of N. W. Thomas’s original glass plate negatives that are held in the Royal Anthropological Institute’s collections.

Photographs made during Thomas’s four anthropological surveys in West Africa between 1909 and 1915 are dispersed in various institutions, including over 5,000 glass plate negatives held at the Royal Anthropological Institute and several thousand loose prints in the collections of the University of Cambridge Museum of Archaeology and Anthropology. Approximately half the photographs made in Thomas’s three Nigerian tours were compiled in albums. Triplicate sets of these albums were made: one was originally kept in the Colonial Office Library in London, another was sent to the Colonial Secretariat in Lagos, while the third was intended for scholarly reference and originally deposited at the Horniman Museum in London. Today complete sets of the albums can be found in the UK’s National Archives and the University of Cambridge Museum of Archaeology and Anthropology. During research in Nigeria for the [Re:]Entanglements project, we also discovered a further 16 albums of Northcote Thomas photographs at the Nigerian National Museum in Lagos, presumably those that had originally been deposited at the Colonial Secretariat.

Many of the prints on display at the Royal Anthropological Institute are so-called ‘physical type’ portraits. In the late nineteenth century and early twentieth century anthropological orthodoxy imagined the world’s population to be divided into distinct races and tribes, each with its own language, material culture and cultural traditions. It was also believed that people belonging to these groups were physically different from one another. Anthropologists of the era, including N. W. Thomas, expended a great deal of effort in mapping these different groups and their physical characteristics. One technique for doing this was through making photographic portraits of people – usually full face and profile – which could then be compared. The same techniques were used in the Ethnographic Survey of the British Isles, for example, but this kind of photography is often associated with colonial attitudes, which seemingly reduced people to objects that could be measured, categorized and compared.

When physical type photographs were published in Thomas’s Anthropological Reports, the captions followed this objectifying anthropological practice. Thus, people were reduced to ‘types’ and the photographs were accompanied by labels such as ‘Man of Awka’, ‘Man of Mbwaku’ and ‘Woman of Isele Asaba’. In keeping with the supposedly ‘scientific’ genre of the photographs, the subjects do not smile. They seem to manifest the colonial violence we expect of them. By examining Thomas’s photographic negatives, however, a different impression emerges: Thomas was usually careful to note the names of those he photographed and, among the unpublished outtakes, we find people smiling and even giggling. This challenges our expectations and suggests there was a more personal relationship between the anthropologist and the person being photographed.

Despite the large number of physical type photographs made by Thomas while he was engaged as Government Anthropologist, the colonial authorities themselves had little interest in them, regarding them as being of ‘purely scientific interest’ and of no value in colonial governance. Thomas himself seems to have pursued this kind of photographic practice more out of a sense that this was what a professional anthropologist was expected to do, rather than a conviction in its scientific import.

The physical type photographs displayed in the Royal Anthropological Institute exhibition raise difficult questions, particularly for an institution founded in the 1870s and also entangled in histories of colonialism and ‘racial science’. Some of the faces smile, but others gaze into Thomas’s camera lens defiantly. They return the colonial anthropologist’s gaze, and now, gazing down from the Institute’s meeting room walls after 100 years hidden away in storage, they confront and unsettle representatives of the discipline today.