Focusing on the physical type photographic portraits made by the Government Anthropologist, Northcote Thomas, in West Africa in the early 20th century, this presentation by Paul Basu discusses some of the [Re:]Entanglements project’s filmic interventions that address the ‘absent voices’ and ‘silences’ in the colonial anthropological archive.

The talk was a contribution to the ‘Colonial Film Archives: Interrogations and Interventions‘ panel at the Royal Anthropological Institute’s Ethnographic Film Festival Conference held in March 2021. The broad theme of the conference was ‘Creative Engagement with Crisis’.

Among various issues, Paul Basu discusses silences in the colonial archive as both a violence and an act of resistance. Drawing on the work of Tina Campt in Listening to Images, he questions whether the Thomas’s photographic portraits are indeed silent, and discusses various approaches to ‘voicing’ these photographs, including using photo elicitation methods, inviting people to voice what the photographs ‘say’ to them, and using storytelling to speculate on what Thomas’s subjects may have had to say.

Reference is made to the [Re:]Entanglements project films Faces|Voices and Unspoken Stories.

We are delighted to announce that Faces|Voices has won the Best Research Film Award at the AHRC Research in Film Awards 2019. Faces|Voices is the first of a series of films we have produced in collaboration with The Light Surgeons as part of the [Re:]Entanglements project. Participants in the film voice their responses to the silent faces captured in Northcote Thomas‘s physical type portraits, photographed during his anthropological surveys in Nigeria and Sierra Leone between 1909 and 1915.

The Awards ceremony took place on 12 November 2019 at the British Film Institute on London’s Southbank. It was wonderful seeing Faces|Voices projected on the huge screen of the National Film Theatre, and of course it was a great honour to win the top prize. Paul Basu received the prize alongside co-director Chris Allen of The Light Surgeons.

The award resulted in some great media covered for Voices|Faces and the broader [Re:]Entanglements project. Please explore some of the links below.

We would especially like to thank the participants in Faces|Voices – Ebony Francis, Robert Kelechi Isiodu, Kofi Mawuli Klu, Yvonne Mbanefo and Esther Stanford-Xose – whose eloquent commentaries on Northcote Thomas’s photographs made the film such a success.

Looking through the photographic archives of Northcote Thomas’s early twentieth-century anthropological surveys of Nigeria and Sierra Leone, one gazes upon thousands of faces. Faces of men, women and children, many photographed against a canvas backdrop; all of them silent. What were they thinking as they were being photographed by this Government Anthropologist, perhaps with a number card held above their heads? Was the encounter with this pith-helmeted white man, with his entourage of carriers and boxes full of strange equipment, an unpleasant one, or an amusing distraction from everyday chores? What can we see in the faces Thomas photographed? What can we read in their expressions?

In Faces|Voices, a short film we have made as part of the [Re:]Entanglements project, we invited participants to reflect upon some of the faces captured in Thomas’s photographic portraits and to comment more generally on the significance of these archival images. Adding their voices to the mute photographs, we find that the same portrait may invite quite different ‘readings’. Where one may see coercion, another might detect boredom. The crushing experience of colonialism may be found in one subject’s expression; optimism and resilience in another’s. Perhaps most surprising is the sympathetic view – even identification with – the face of the Government Anthropologist himself.

The film complicates any simple reading of the colonial archive. Even ‘physical type’ photographs, intended to identify and classify people into different racial or tribal categories, and which seemingly epitomize the violences of colonial ideologies, become ambiguous on closer inspection.

What do you read in these faces? Please make your voice heard by adding a comment.

Faces|Voices was made in collaboration with The Light Surgeons as a pilot for a video installation for the [Re:]Entanglements exhibition planned for 2020. See also our earlier blog entry about the making of the film. Many thanks to our participants: Ebony Francis, Robert Kelechi Isiodu, Kofi Mawuli Klu, Yvonne Mbanefo and Esther Stanford-Xose.

Faces|Voices was winner of the Best Research Film prize at the 2019 AHRC Research in Film Awards. 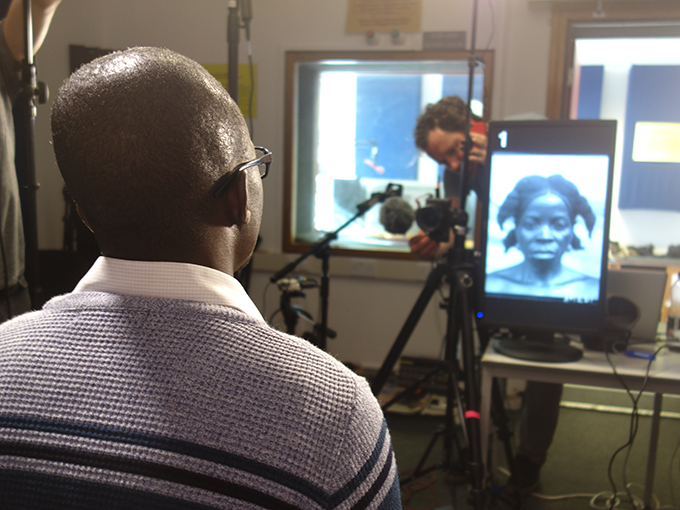 As part of the Museum Affordances / [Re:]Entanglements project we shall be creating an exhibition. Initially, this will be installed, from October to December 2020, at the Brunei Gallery at SOAS University of London, close to the British Museum. It will then transfer to the University of Cambridge Museum of Archaeology and Anthropology in 2021. We hope to bring together some of Northcote Thomas’s original collections, photographs and sound recordings alongside artworks and research material that we have assembled throughout the project. The exhibition is not, however, intended to be merely a display of ‘research findings’ – it is intended to be a continuation of the research itself. This builds on some of our own and others’ work on the exhibition as a kind of ‘laboratory’ or experimental space. We hope the exhibition will provide an inspiring and provocative forum in which visitors with different perspectives can come together to discuss and debate some of the issues that the project seeks to address.

As part of the [Re:]Entanglements exhibition, we are collaborating with the multimedia creative studio The Light Surgeons to make a video installation we are conceptualizing under the title ‘Faces/Voices’. We recently filmed some initial interviews to begin the process of developing this installation. During the four anthropological surveys N. W. Thomas undertook in West Africa between 1909 and 1915, he made thousands of photographs. About half of these were so-called ‘physical type’ portraits – typically taking a full-face and profile portrait photograph of each of his sitters. Such photographs have been much discussed and heavily criticized in academic and postcolonial literature. We are interested, however, in how different people ‘read’ these photographs in different ways. Do they epitomize the ‘anthropological gaze’, turning people into objects to be collected, collated and compared? Can we somehow discern in people’s expressions their inner experience of colonialism? Or do they reveal an intimacy between the anthropologist and the communities that he was working with that points beyond the colonial critique?

By juxtaposing Thomas’s historical photographic portraits with the faces and voices of project participants and members of the public, we hope to explore the diversity of responses to these images, allowing the different perspectives to co-exist alongside each other.

Thomas’s photographic portraits are mute. The people he photographed lack ‘voice’ (although we are also experimenting with reuniting Thomas’s historical photographs with his sound recordings – perhaps giving back voice to these images). In the pilot video shoot, we began experimenting with how the photographs enable people today who have often very different connections with the areas in which Thomas worked to voice their own positions and responses to the anthropological archive.

We’ll be doing more filming in due course. Let us know if you would like to participate!

A video introducing some of the work we have been pursuing in the University of Cambridge Museum of Archaeology and Anthropology stores by George Emeka Agbo, the project’s postdoctoral research fellow.